We’ve all heard the accounts of strange things falling from the skies.

Everything from squid, fish, frogs, cows, and blood have been reported. 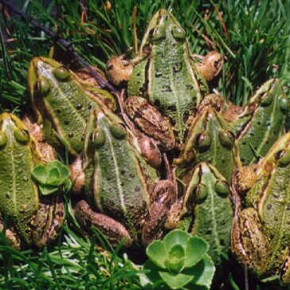 Most of these incidents can be explained, usually by a waterspout or tornado.

In the case of the cows, a Russian aircraft was blamed, and the ‘blood’ turned out to be water colored by a micro-organism.

Even the bible gets in on the game, relating plagues of frogs and brimstone falling from the heavens to punish Pharoah.

Brimstone, thought to be sulfur, raining down as part of God’s wrath has been lacking since biblical times.

But something akin to it may have fallen in New Jersey in 1833.

But it wasn’t sulfur, it was Jelly.

In the town of Rahway people saw what they described as firey rain falling, and on the ground were lumps of a gelatinous substance.

By afternoon the jelly had dissappeared, leaving in its place white particles.

Another case from 1696 tells us of a substance described as butter falling over large parts of southern Ireland.

It was yellow, stank and was consumed by grazing cattle who apparently suffered no ill effects.

The locals promptly collected the material and used it as a medicine.

In 1846 in Vilna, Lithuania a grey jelly fell during a rainstorm.

When burned the material gave off a sweet smell, and was soluble in water.

Angel Hair and a UFO Link

Even stranger is a material known as ‘Angel Hair’.

There are a number of accounts of this fiberous substance observed to have fallen from the sky, and any attempt at collecting it results in it completely subliming away.

It can appear similar to spider webs drifting in the wind, or even has been described as being like cotton.

The origin of angel hair has yet to be determined other than an unsatisfying blanket explanation of it being airborne spider webs.

Angel hair has also been associated with the UFO phenomenon.

As early as 1948, in Ontario, a report exists describing angel hair falling during a UFO sighting.

A 1952 account from France relates that the material fell in two different towns in conjunction with the sighting of a cigar shaped object.

The accounts of this material are very similar to that of angel hair that is not associated with a UFO sighting in that it also usually sublimes away when handled.

One exception occurred on a ship moored in Canada in 1962, where the strands were described as very strong and resilient.

As late as 1998, reported by USA Today and the AP, twenty UFOs were seen over Quirindi, New South Wales, Australia.

As they passed, they littered the ground with angel hair.

The material has also been associated with sightings of angels, and stands as yet another example of how separate paranormal phenomena sometimes appear to be inexplicably linked.

The true story of this substance called angel hair remains a mystery.