Some years ago a scientist by the name of Richard Muller formulated a controversial theory regarding the possibility of a second star that may orbit our sun in the outer reaches of the solar system. 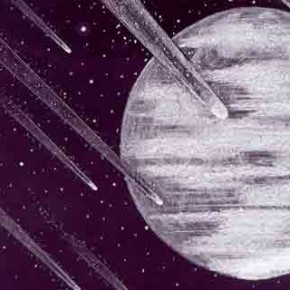 Stars and a planet

Updated 2/11/2020 – Formulated in 1983, the theory was designed in part to explain a seemingly regular interval of 26 million years between mass extinctions on earth.

Its now widely accepted that these extinctions do occur, one of them killed the dinosaurs,  and were normally the result of asteroid or comet impacts.

But what sent these objects careening toward earth every 26 million years?

Muller believed it might just be due to a second star.

He named it Nemesis after the Greek goddess of divine retribution, and suspects that if it exists it would probably be a common red dwarf type star.

He also thinks it should be easily visible from earth, if we knew where to look.

If it exists, its almost certainly already been photographed, but simply hasn’t been noticed.

Stranger things have happened in the history of astronomy.

If its out there, Muller suspects it must orbit very distantly at a whopping 1 to 3 light years from earth, quite distant when you consider that the nearest separate star is Proxima Centauri at 4.22 light years away.

Nemesis’ orbit would be irregular, sometimes making a closer approach, near enough to disturb the grouping of icy comets at the edge of the solar system known as the oort cloud, and sending some of them our way.

But the distance of that orbit calls the whole theory into question.

Stars that orbit so far from eachother are rare indeed, if they exist at all, though there also isn’t any particular reason why they can’t.

Its also been suggested that Nemesis might be another type of star, known as a brown dwarf.

These small failed stars are large, bigger than Jupiter for example, but are too small to sustain the nuclear hydrogen-to-helium reactions in a star’s core that are needed to run the stellar engine.

Without that, its simply a giant ball of gas that is much, much harder to detect.

That would make Nemesis much more difficult to find.

In recent years, the water has become increasingly muddy.

Scientists have backed away from the observation that impacts seem to be periodic.

But that hasn’t killed the Nemesis theory quite yet.

Future planned astronomical surveys may detect the star, but until then, whenever you look up at the night sky, think of the possible companion to our sun that may exist in a distant orbit, waiting to unleash yet another flurry of extinction upon our world, and perhaps even ourselves.